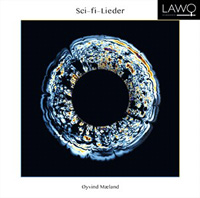 Description: The song cycle comprises ten songs with words taken from Øyvind Rimbereid’s extended poem Solaris korrigert (2004). The premise is of a society far in the future in which humans are in danger of going extinct, and now live under the sea - "Ad undas”. The poems suggest a nostalgic reflection on what happened, at times almost childike, rather than a gleaming vision of a futuristic technological paradise. The ingenious invented language of the poetry, derived from various languages and the protocols of digital messaging, suggests a culture far removed from our own, but remains surprisingly comprehensible (much like Anthony Burgess' "nadsat" argot in A Clockwork Orange"). Vocally, the settings are extreme, requiring a wide range of extended techniques and vocal acting, but the piano accompaniment is reassuringly familiar, consisting largely of chords and gestures that could be sampled snippets of Messiaen, with some sonorous direct contact on the strings. The composer subsequently expanded this work into an opera, from which the wordless dialogue KOMMEN du vid meg? is taken. The 20-minute quartet, the piano work and the one for violin and piano all experiment with events that happen at the attack and release of notes, the piano accentuating those moments by adding knocking sounds on the body of the instrument, for example. The works abound in extended techniques and textures, though the strong rhythmic pulse that develops (alongside the microtonal inflections) in the quartet's first movement implies a familiarity with (and possibly dismissal of) minimalism; the calmer second movement consists of slowly shifting and cumulative clustered textures. Stine Janvin Motland (vocals), Sanae Yoshida (piano), Liv Hilde Klokk (violin), Øystein Sonstad (cello).