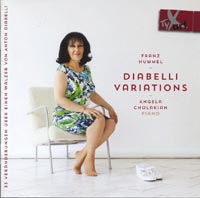 Description: If it were not so brilliantly carried off, this breathtakingly presumptuous exercise could have been either unnecessary pastiche, or something unrelated to its proclaimed subject matter, named purely to provoke. As it is, Hummel draws on his immense experience of the classical and romantic repertoire from his previous, hugely successful career as concert pianist (before he turned his attention almost exclusively to composition) to produce a work that genuinely complements Beethoven's. On one level, the work simply succeeds as a superb set of characterful variations in a tonal language that extends Beethoven's somewhat - but not that much, considering the boldness of Beethoven's experimentation by this stage in his career. The effect is somewhat similar to Godowsky's extension of the vocabulary of the models for his transcriptions; the original is always present, but the piece is new - in this case, literally and entirely so. But, because it's impossible to ignore the background presence of its illustrious ancestor, there is also the sense of an extended, very sophisticated musical joke; sometimes this is manifested in flawlessly imitated Beethovenian gestures, sometimes in references to other works of Beethoven. A myriad references to other composers' styles and specific works (have fun spotting them all) add to the entertainment factor, and to the sheer sense of enjoyment - for composer, performer and listener - that this splendid exhibition of compositional virtuosity generates throughout. Angela Cholakian (piano).