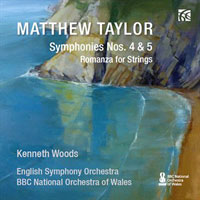 Description: With this release Taylor's standing as a major British symphonist of our time, in the tonal, northern European tradition, is further reinforced (see also 08P009, 03I083). The Fourth Symphony is dedicated to John McCabe's widow, Monica, in his memory. The two composers were friends, and shared a number of musical enthusiasms including Nielsen and Haydn, both of whom make their mark on this symphony. The first movement revels in the kind of bravura extrovert exuberance which is an essential and unmistakable trademark of Nielsen's symphonic style; bold, commanding, imperturbably sweeping all before it. The composer describes it as "Falstaffian". Perhaps exhibiting characteristically English understatement, Taylor seems to downplay the emotional profundity of the slow movement in particular; he describes the work as "arguably my most friendly symphony so far" and suggests that there is "little that is consciously elegiac" about it, preferring the idea of a memorial tribute as a celebration. Perhaps so, but in the second movement, while comparisons to Nielsen, Sibelius, Simpson, even Bruckner, are useful in describing Taylor's general idiom, the monumental tragic sweep of the first section of this Adagio, and the central climax with its inexorable pulse, immediately put one in mind of the Mahler of the 9th Symphony. The gentler sparer lament that follows, with a succession of solo voices over a hushed, haunted accompaniment, is very reminiscent of certain gestures of Shostakovich, though overall the music is quite distinct from that of the Russian master. The "finale buffa" has a boisterous good humour that Haydn might have enjoyed, with surprises and upheavals along the way that he would have appreciated; Shostakovich’s wry scherzos (the less menacing ones) are also evoked. Finally the material from the opening of the symphony is reintroduced with increasing weight and power, culminating in a grandly exuberant conclusion. The Fifth Symphony, although written for a much smaller, Beethovenian, orchestra (it shared the programme with Beethoven’s 5th, a work of early and enduring significance to Taylor, at its first performance), is a more intense, strenuous work than its predecessor. The first movement is a tense, combative sonata-(ish)-Allegro, that sounds little like the Beethoven but shares its concise, shattering impact, with enormous momentum built from cascading short motifs. It ends with an apocalyptic timpani 'cadenza'. The remainder of the symphony departs radically from the classical form suggested by the opening movement, comprising three memorials to people important to the composer who died in 2018. The central two movements are small intermezzi for modest forces; the first is a genial, mercurial serenade-scherzo in memory of the composer’s friend and colleague Cyril (“Cy") Lloyd (a composer whose output includes 7 symphonies - record companies please take note). The next is a wistful, delicate tribute to Robert Simpson's widow, Angela, for divided strings and flute. The huge Adagio-finale - almost as long as the other movements combined - is a memorial to the composer’s mother. The Mahlerian feel of the slow movement of the 4th is equally present in the early part of this sombre music, which becomes increasingly vehement and tragic as it passes through two extended development or variation episodes on the main material of the movement. The explosive timpani solo from the first movement interrupts this precipitous descent into darkness which is replaced by a sorrowful string threnody, cut short by the leaden echo of a terrifyingly bleak brass chord. English Symphony Orchestra, BBC National Orchestra of Wales; Kenneth Woods.