ELLEN LINDQUIST (b.1970): Mantra for Gamelan and Sinfonietta, BENT SØRENSEN (b.1958): Minnelieder - Zweites Minnewater for Chamber Ensemble, TOSHIO HOSOKAWA (b.1955): Drawing for 8 Players, KRISTIN NORDERVAL (b.1957): Chapel Meditation for Voice and Plucked Piano (Norderval [voice], Else Bø [piano]). 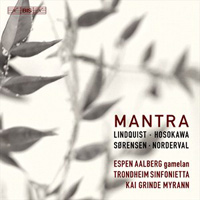 Description: This recording celebrates the 20th anniversary of the Trondheim Sinfonietta, with four works from just a bit more than that period of time, that they presumably just wanted to play, and that share a loose connection in referring to ancient or primordial ideas. Lindquist's concerto, for one percussionist playing a selection of Gamelan instruments, is a very slow sonorous, resonant meditation, with nothing in common with the reference to Gamelan music of the proto-minimalists, aside from being, broadly, consonant, with pitch inflections in the orchestra to blend with the Indonesian instruments. The work has a timeless, hypnotic quality. The Hosokawa is a dreamlike abstract tapestry representing the idea of birth. Sørensen's piece has the "shadowy, dreamlike, rather dark mood" common to many of his works, e.g. those on 05T075 earlier this year. With his typically unusual sonic palette, the composer draws new emphases from an earlier work subtitled 'Thousands of Canons', which suggests the teeming, overlapping waves and ripples of sound, gradually accumulating chattering rhythms in episodes marked "Maniaco con delicatezza" and later "Maniaco e nervosa". The Norderval is a short evocation of early chant in a resonant space, as the title suggests. Espen Aalberg (gamelan), Trondheim Sinfonietta; Kai Grinde Myrann.