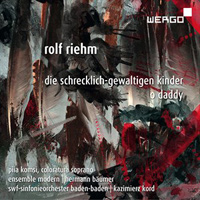 Description: Riehm's works are often based on resonant mythological subjects and a bardic sense of story-telling, and this is very much the case in the two patricidal narratives presented here. "The Terrible and Violent Children" are all the descendants of the Gods - that is, all of us, from the very beginning. Based on an episode in Hesiod's "Theogony", it concerns, in the composer's words " ... what the ancient writer Hesiod described with such bitterness and brutality: human relations are based on violence. This is the subject of my piece.” The music is, accordingly, unrelenting intense, in an eclectic style that refers to idioms in which epic myths have been depicted in music before - there is a strong strain of Romanticism amidst the modernity - the whole being held together by the soprano's floridly acrobatic narrative thread, a tour de force in its own right. Dense, powerful blocks of orchestral texture (not for the first time in Riehm's output recalling Messiaen's Easter Island statues) support the weight of the terrible myth and its reverberations through history. O Daddy is a large tone poem based on a story from our own time, suggesting an inevitable consequence of the first piece; a case in Italy in 1977 in which a teenager killed his tyrannical father and received overwhelming public support for his action. The large orchestra is used in textures of Lachenmannic density and sonority, the narrative heightened by the electronic part; distorted narration, broadcast fragments, trite popular tunes like the result of randomly scanning the radio dial suggest both an interior monologue formed of found experiences and the noises of an uncomprehending world going about its business oblivious to the horror in its midst.