ISANG YUN (1917-1995): Cello Concerto, Violin Concerto No. 1, Fanfare and Memorial for Orchestra, Interludium A for Piano, Glissé for Solo Cello, Kontraste for Solo Violin, Gasa for Violin and Piano. 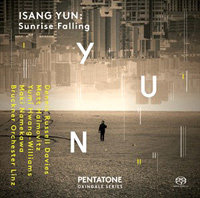 Description: Excellent new recordings of two of Yun's most gripping major scores. As anybody who collected the now defunct and unavailable Camerata series of Yun CDs will be aware, his music passed through several phases and underwent a radical change in the late 1970s toward greater accessibility, use of western structures and idioms, and overt autobiographical and emotional content. While the denser, more atonal works of earlier decades unquestionably included some very fine and powerful music, the concertante works of this period represent a pinnacle in his output. The powerful Cello Concerto (1976), in a single span subdivided into three sections corresponding to the traditional three movements, was a watershed. The opposition between the cello and orchestra specifically refers to that between the individual and an oppressive society, and even more specifically to the composer's kidnapping and imprisonment as a victim of the conflict between the two Koreas. The western concerto structure and harmonic relationships lend themselves to confrontational dialogue, while subtle evocations of the timbres, melodic contours and microtonal inflections of Korean traditional music leave one in no doubt of the arena in which the drama is being played out. The larger - 40 minute - Violin Concerto is even more firmly based in the western tradition, with some wonderfully opulent orchestral tutti that even distantly evoke Richard Strauss! Both concerti are technically challenging and emotionally complex and intense, the later work perhaps more universal, less a direct encounter between the composer and his demons. Fanfare and Memorial, written between the two concerti, was composed for the 60th anniversary of the Münster Symphony Orchestra, and could almost be by an European composer with a fascination with the East - someone like Enjott Schneider, for instance. The bold, western fanfare theme is gradually subverted by more freely structured, gentler Asian material. The solo works, spanning 1963 to 1987 illustrate Yun's preoccupations at different times, from early exploration of the non-western inflections and techniques of his native music to a western-contextualised evocation of and homage to it. 2 CDs. Yumi-Hwang-Williams (violin), Matt Haimowitz (cello), Maki Namekawa (piano), Bruckner Orchestra Linz; Dennis Russell Davies (piano, conductor).