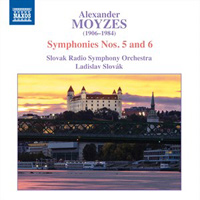 Description: The third volume in this reissue series of symphonies by the 20th century’s greatest Slovak symphonist continues with the eloquent and sprightly Fifth of 1947-48, a celebration of ‘the heritage of my dear father,’ who was also a talented musician and an important figure in the composer’s musical development (after his teacher, Vítěsalav Novák, of course) and the Sixth (1951) notable for its clarity and symmetry, from the simple theme of its opening to the brilliant contrapuntal fugato in its closing movement. Slovak Radio Symphony Orchestra; Ladislav Slovák. Original 2001 Marco Polo release.