ERKKI-SVEN TÜÜR (b.1959): Symphony No. 5 for Big Band, Electric Guitar and Symphony Orchestra, Prophecy for Accordion and Orchestra. 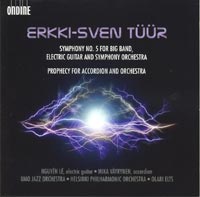 Description: Despite its unusual combination of forces, this symphony is another example of Tüür's knack for making diverse and apparently contradictory styles work together. The piece is structured symphonically, with motivic cohesion between movements, which is what sustains its substantial scale and prevents it sounding like a point-proving 'crossover' exercise. In the first movement, the orchestra and jazz band are largely confined to their own territory - the orchestral part sounds appropriately like the introduction to a modern symphony, building increasingly dense waves of texture out of evolving ascending and descending motifs, while the insistent interjections from the other ensemble are much more tonal chords, the kind of thing you'd expect to hear from a big band. The guitar only takes center stage late in the movement, with an improvised solo over a basic pitch established by the orchestra. The sound is unfamiliar, but the logic of the instrument as a solo foil to the symphonic ensemble is immediately apparent. The slow movement belongs exclusively to the symphonic structure, forming extended fluid melodic structures in increasingly dense textures from the motifs presented by the orchestra in the first movement. The third movement is the symphony's scherzo, largely centered on the band and guitar, a very effective piece of modern big band jazz, with free jazz soloing - think of 1980s Loose Tubes. The orchestra gets co-opted into the rhythm section - great fun this! - and after the movement climaxes, it disintegrates into oscillating figures that introduce the finale. The music accumulates texture, then suddenly the acquires a distinct rhythmic pulse, which soon develops into a full-blown episode of symphonic rock, with the guitar fully asserting its credentials as soloist. But the whole thing is unstable, and finally explodes, leading to a prolonged coda in fluid, glissando-laden orchestral sonorities and microtone-colored, ethereal chords. The accordion concerto, in four distinct, linked movements, also takes its unorthodox soloist entirely seriously, blending it in close dialogue with the orchestra in the same vocabulary of extended tonality and exploiting its versatility of articulation to imitate ideas back and forth between different sections of the orchestra. Nguyên Lî (electric guitar), UMO Jazz Orchestra, Mika Väyrynen (accordion), Helsinki Philharmonic Orchestra; Olari Elts.