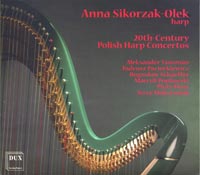 Description: Popławski's twenty-minute Morceau de concert is by far the earliest work here, from 1911. Even so it is by no means 'advanced' for its date of composition, belonging to the richly romantic idiom of the nineteenth century. A very appealing rarity, full of harmonic warmth and melodic charm. The Tansman is an attractive neoclassical work in four movements, typically elegant, tonal, with a feeling of Ravelian harmony. Paciorkiewicz's concerto also follows classical principles, in a conventional three-movement form. The piece is thoroughly tonal, with some mildly astringent harmonies, modest in scale and relatively undemanding for the soloists, at least as compared to Tansman, who keeps the harpist firmly in the spotlight throughout. After these two staunch traditionalists, Schaeffer is a rather different matter. His largely (not entirely) atonal concerto of 1986 is an offshoot of the vigorous modernist movement in Polish music of the previous decades. It contains some aleatoric sections, though the composer largely avoids greatly extended techniques or sonoristic cluster tetures, and a good deal of the solo part is surprisingly conventional, though placed in a very dissonant orchestral context (with a couple of unexpected, brief jazz episodes). Moss' Voyage has a theatrical, or cinematic, feel to it, consisting as it does of a series of atmospheric episodes suggestive of scenes in an unspecified dramatic narrative. These range from neo-romantic gestures, tonal in a 20th-century sense, to waltz and march pastiche, to sound effects of uncertain tonality, with the two harps used creatively as a prominent coloristic element of the ensemble rather than in the usual concertante sense. Maksymiuk's suite has a most unusual form. The piece begins with three movements for the soloists alone, of somber, nocturnal character in a somewhat modally inflected vocabulary, suggesting folk music of different ethnicities. The orchestra contributes a subtle cluster chord in the fourth movement; then the soloists again explore a gentle, atmospheric soundworld, this time with some subtle unconventional techniques. It is only in the last two sections, a motoric toccata leading to a calm melodic finale in glowing chordal textures that the work resembles a conventional concerto. 2 CDs. Anna Sikorzak-Olek (harp), Polish National Radio Symphony Orchestra, Katowice; Bogdan Oledzki (Schaeffer), Jerzy Maksymiuk (Maksymiuk) and Michal Klauza.