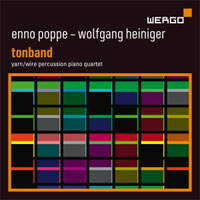 Description: More paradoxically accessible, exciting works of ferocious modernity from the fertile imagination of Enno Poppe, here paired with his frequent electronic collaborator, Heiniger. Part of Poppe's secret is that his most complex, avant-garde effusions constantly echo instantly recognisable archetypes from music history. The complex mineralogy of the towering monoliths of Fett (11W064) is that of Bryce Canyon or Easter Island, transported "aux étoiles" into an alien landscape. Felt (01W058) is a drum solo that has undergone some crystalline efflorescence; Filz (06W063) is demonstrably a "traditional" concerto, its meticulously formulated arguments, dialogues and disputes played out on a three-dimensional chessboard. And so on. Much of the composer’s music exploits preternaturally supersaturated colors of microtonal harmonies, but there is none of that in Feld, scored for conventionally tuned pianos and predominately mallet-struck percussion. "Mechanistic" and "motoric" have become (excessively?) favored adjectives for describing a certain type of music, but in Feld, Poppe has transcended the usual limits of the term by treating the ensemble almost literally as a mechanism. If you imagine a player-piano performing a piece by Nancarrow, while microphones inside the mechanism pick up and amplify the details of its inner workings, you will capture something of the thrillingly precise exuberance of the work. A third of the way through the work, the tumultuous activity is suddenly becalmed, and the reduced texture suggests some kind of intricate mechanical loom, weaving a complex tapestry from small repeating gestures that restlessly hocket around the ensemble. The patterns - "accelerated Feldman" Poppe wryly calls them - become increasingly irregular and dense, and eventually the weaving machine, as though possessed, uncontrollably rolls out bolts of extravagant color and complexity of design. The half-hour plus Tonband is the collaborative work here. The piece is admittedly largely for electronic music aficionados, though the adventurously unbiased will find the sheer variety of sound effects fascinating. The percussion music triggers, through a multiplicity of channels, the live electronic transformation of its sonic components, played on keyboards; in other words the live sounds modulate the electronic ones like a fantastically complex modern equivalent of Stockhausen’s famous ring modulators. The composers restrict themselves to the electronic sounds and transformations that were available before the computer age, with its limitless sampling, spectral analyses, and synthesis, so the piece frequently has a decidedly "retro" feel, with meandering electronic organ "melodies", pitch shifting, and extreme filters emulated using modern means, in affectionate and ironic tribute to the pioneers of electronic music - even the title pays homage to the magnetic tape pieces on which early experimenters in the field cut their teeth. Heiniger's "New Moon" draws on his experiments for Tonband. Two MIDI keyboards are programmed with the lovingly recreated sounds of vintage electronic organs, and they play off each other and the percussion (and vocalised moans from the players) using the same pitch shifting and modulation techniques as Tonband, to produce a hilarious, affectionate send-up of the then foreboding and otherworldly, but now perceived as gauche and corny, electronic clichés of early horror and science fiction films. Yarn/Wire.