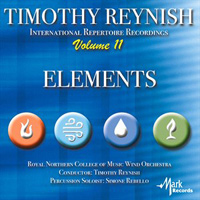 Description: Gorb's suite represents the four classical elements in colorfully orchestrated music in the composer's customary accessible, thoroughly tonal idiom (see also 07S075, 08M090). 'Earth' is rough and loud, bold, jazzy and, well, earthy, with the soloist cutting through the ensemble with various drums. 'Water' follows in aqueous, flowing textures, including submerged references to Wagner's Rhinemaidens. The flickering 'scherzo' 'Fire' follows, with the marimba giving way to the more intense heat of metallic percussion. The finale floats on Air with the slow gentle currents and wafting breezes outlined by the mellow vibraphone. Bingham delves into Americana in her witty first work (1997) for the quintessentially American ensemble. Structured as a French Suite, the ostensible subject of the piece is the conspiracy theories and legends that grew up around the Kennedy assassination. The energetic, minimalistic courante that opens the work depicts time racing down toward the moment when Jack Ruby shot Lee Harvey Oswald. This is followed by a sleazy swing 'musette', then a rondeau 'about' Marilyn Monroe, which, long before Robin de Raaff's opera (12R051), explores Monroe's fragile psyche, leading to a film-noirish section that prefaces the finale, a frantic depiction of the panic on the Grassy Knoll, complete with blaring motor horns and police whistles. Heathcote's Inferno - presumably referring to Heathcote Williams' recorded reading of Dante, which had just been issued at the time of composition - is a dark-hued, rather dissonant passacaglia, increasingly turbulent and densely orchestrated as it progresses. Royal Northern College of Music Wind Orchestra; Timothy Reynish.