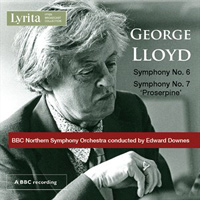 Description: Edward Downes was a tireless advocate for Lloyd's music, almost single-handedly responsible for its revival in the 1980s. So we are very fortunate to have these pioneering broadcasts, both world premières. The Seventh may justly be regarded as Lloyd's greatest symphony. Inspired by the myth of Persephone, and provided with a kind of program by the composer, it compellingly suggests a far more personal tragedy, likely the exorcism of Lloyd's own wartime trauma. The last movement in particular is very dark and unusually vehement for Lloyd, easily the closest he ever came to the world of V-W's 4th symphony, the "monstrous anger of the guns" and "the stuttering rifles' rapid rattle" clearly depicted. The symphony fits into his canon, though, in the same way that Sibelius 4 fits into his; the composer is instantly recognisable, but the work plumbs unfamiliar depths. The delightful 6th, by contrast, is brief, elegant, witty and sparkling; almost a 'symphonic divertimento' by the side of its epic, tragic neighbor. BBC Northern Symphony Orchestra; Edward Downes (broadcast Dec. 31, 1980 and Sept. 5, 1979).