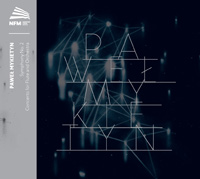 Description: When is a non-symphony a symphony? Perhaps when it is composed by the ultimate ironic post-modernist and still manages to pack the dramatic and emotional punch of a full-blown romantic work to which the title naturally applies. Mykietyn's career thus far has passed through a number of phases - post-modern polystylism, microtonal explorations, the borrowing of certain popular idioms, and most recently, the compression and stretching of musical time by very long, gradual tempo changes, sometimes operating independently in different parts. But the phases overlap, and the innovations of previous stages are not abandoned in subsequent ones. The symphony has elements of all these; grand romantic gestures, microtonal cluster chords, two episodes of slow, cumulative accelerandi leading to powerful climaxes, a pointillist representation of orchestral swing, hocketing all over the orchestra like a film of a dance from which all but a few random frames have been removed, a frantic 'out of tune' folk fiddle, and more. The result is as compelling as it is unsettling. The concerto is the composer's experiment in constructing a piece from just one of these elements; a very slow deceleration of tempo. Beginning with just the soloist, other instruments gradually join in in filling in the gaps between the notes as they recede from each other, but it is only in the last few minutes that harmony is achieved, after which it turns out that the whole piece has been stealthily becoming a neo-romantic concerto all along. Łukasz Długosz (flute), NFM Wrocław Philharmonic; Benjamin Shwartz.