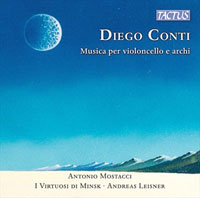 Description: When we offered Conti's string quartets in 2017 (08T071) we remarked on the wide-ranging polystylism of his approachable and expressive, often compelling but sometimes mystifyingly inconsistent style, without being able to reveal its origins. It turns out that he came to music via progressive rock, investigated the usual suspects of 20th-century concert music first, then moved backwards through music history, learning and absorbing as he went. He explains his idiom as freely incorporating that multiplicity of styles ad libitum, and claims distrust of artists whose stylistic horizons he sees as too limited, leading to the extraordinary statement "When a work of art is uniform I get bored, I know how it is going to finish, the first time I listen to it, the first time I read it, at first glance." which if true implies a præternatural level of prognosticatory percipience. Maybe something got lost in translation. Anyway, Menesk is a substantial chamber-orchestral tone poem based on a fairytale about the founding of the city of Minsk. Mostly neo-romantic, with an eloquent solo part portraying the protagonist (a lonely giant who comes to embrace the revelries of his neighbours and ultimately invites them to build their new town around his mill), it evokes Russian Romantic tone poems in its rich harmony and tone colours, and embraces the chromaticism of late Romanticism, while some episodes of the narrative elicit angry dissonant clusters and modernist textures, but only briefly (but effectively, leaving no doubt as to which part of the story is being portrayed), and in one, a rough folkdance fleetingly appears. Luna, maledetta luna was inspired by Bob Shaw’s The Ceres Solution, a science fiction novella of the civilization-building genre typified by Isaac Asimov and Frank Herbert (among many others). The range of intense situations and conflicts, odd characters, and strong emotions in the book provide ample scope for Conti's polystylistic juxtaposition of disparate styles, ranging from gloriously lush romantic harmony and tender counterpoint to jittery mechanistic pulsations, the entire ensemble treated as a percussion instrument, to wild atonal whoops, to subdivided string textures that sound as though Conti is auditioning for the soundtrack of a remake of 2001: A Space Odyssey. Conti's transcription of the Schumann concerto was made for these performers, adds little to our appreciation of the piece while subtracting less than you might think, and is very skillfully done. Antonio Mostacci (cello), I Virtuosi di Minsk; Andreas Leisner.