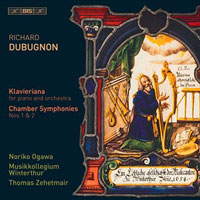 Description: The Swiss composer writes in a readily approachable idiom that draws on styles and influences from all over Europe, but ultimately establishes its own identity, which falls under a very broad neo-romantic banner. The two Chamber Symphonies, for a modest but varied orchestra, contrive to sound "bigger" than they are, such is the wealth of inventiveness and painterly, coloristic orchestration that is a speciality of the composer. The first plays continuously, beginning with a bustling, chattering section introducing the themes of the work's extended sonata-form structure. Several important solo parts, including a violin cadenza which offers a reflective interlude amidst the lively activity as part of the work's elegant, sensuous "slow movement", enliven the textures. The work’s effervescent energy returns for a lively finale, recapitulating the themes in decisive conclusion; meditative solo strings usher in the coda. The Second Chamber Symphony is larger and more ambitious in scope than the first. It is a tribute to theWinterthur Musikkollegium’s musicians from the 17th century until today and, at the same time, to J. S. Bach, inspired by the historic stained-glass window reproduced on this CD's cover. The expansive first movement, almost as long as the other three combined, is a chaconne on a series of 17 rich modal chords, beginning in a style reminiscent of early 20th century late romanticism - pre-atonal Schönberg, and even at one point, Mahler. Between some variations, a quotation from Bach's "Singet dem Herrn ein neues Lied" makes a ghostly appearance. The music becomes bolder with successive variations, culminating in a sweeping waltz. The second movement is a fast, jocular fugue, brash and extrovert, building to a climax after which the Bach quotation is heard again. The "slow movement" is a continuation of the Chaconne, now in warm sensuous colours, Impressionistic, or Szymanowskian. The finale is ebullient and openly jazzy, with a surprise appearance by the Bach fragment, before the music romps home with exuberant good humour. Klavieriana is a fully-fledged piano concerto in three-movement layout. The first is motoric and propulsive, somewhere between Prokofiev and Ravel, with the soloist spinning roulades of notes. A weightier episode with some Messiaenic chords ushers in a lush, perfumed episode, and from this point on the piano finds itself being shadowed at unexpected moments by the celesta, acting as a kind of "special guest soloist". The activity resumes with jazzy syncopations and the movement ends with boisterous good humour. The slow movement, Sicilienne, begins as exactly that, warm and sensuous, its full, romantic harmonies almost Rachmaninovian in places. Piano and celesta question and answer each other flirtatiously. A big, bravura cadenza for the piano, on themes previously heard, now embellished with cascading virtuosic figuration, and culminating in swirling undulations of neo-impressionistic ecstasy, links the second movement to the finale. Burlesque and exuberant, syncopated and funky, with Prokofiev-like incisive piano textures (aside from a lush passage of pseudo-Rachmaninov), the music drives forward to a thunderous conclusion. Noriko Ogawa (piano), Rafael Rütti (celesta) Musikkollegium Winterthur; Thomas Zehetmair.