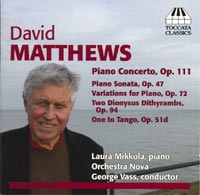 Description: The piano concerto is exactly what one would expect, and hope for, from this avowedly tonal composer steeped in classical forms and a skilled symphonist with (to date) seven examples to his credit. The sonata-form first movement, which bears a slight but curious resemblance to an episode in Ronald Stevenson's Second Piano Concerto, is followed by a lively, humorous tango - a favorite dance form for the composer, used here as a modern substitute for the classical minuet. A bluesy elegy follows, gently grieving but not morose, and a lively finale with a feeling of English folk-song and -dance, somewhere between Grainger and Elgar. The Sonata is twenty years older (1989), and was Matthews' first large-scale essay for the piano. A single span in three distinct movements, it begins with a rhythmic first movement with much syncopation and clear influences of Prokofiev and Bartók before progressing to more lyrical material for the second movement. A jazzy element returns in a lively scherzo and trio, and the piece ends with a blaze of virtuosity. The set of 24 variations from 1997 follows Romantic models, rich in harmony and exploring various moods, textures and implications of a simple, folk-like original theme. Laura Mikkola (piano).