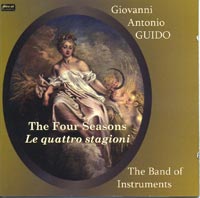 Description: The first "Four Seasons" was composed c. 1716-17 (at least six years before Vivaldi's) by an Italian in France under the patronage of the Duke of Orléans. The score was printed along with the poetry which inspired Guido's representative composition - less literal than Vivaldi, more suggestions of mood although there are singing nightingales and a big summer storm among other pictorial delights. The notes suggest that Vivaldi knew this work and that it gave him the idea to one-up Guido by being even more exact in his musical represenations. Caroline Balding (violin), The Band of Instruments; Roger Hamilton.