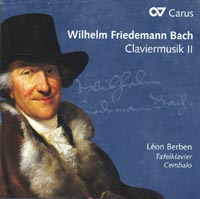 Description: The Naxos series of this music has been going since December 2007 (one volume on fortepiano and four on harpsichord) while the previous volume of Carus' series is over four years old already (December 2010 - 12M033). Collectors will be familiar with Friedemann's playful, sometimes bizarre, buoyant personality so we leave the rest of it up to you. First time a square piano has been used for any of it, though? Léon Berben (square piano, harpsichord).