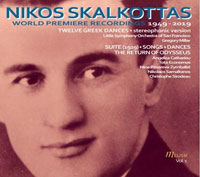 Description: Astonishingly, the opportunity fully to appraise the accomplishments and importance of this major composer, whose output and career are as unique as any, remains some way off, but this highly significant release is an important step in the right direction. The composer fled Berlin abruptly in 1933, and many of his compositions were lost, about 70, including the 1929 suite for violin and small orchestra. Fortunately, Skalkottas had made a transcription for violin and piano, adding a fifth movement in the process, which somehow made its way to America and was rediscovered in 2010. The first movement is brittle and tersely discursive, the second uneasily lyrical, the third an impulsive 'scherzo', and the fourth a sombre, impassioned slow movement. Unfortunately no piano part for the fifth movement has been found, so the brisk, energetic violin part is played 'as is', to give a tantalising idea of what the presto finale might have been (it’s not hard to imagine what sort of accompaniment it would have had in general terms). The 36 Greek Dances are Skalkottas' most approachable score, gems through which his love for the music of his homeland shines brightly. They combine his exquisite sense of orchestral colour and clarity and ingenious harmonies with an absolutely authentic feeling for Greek folk idioms, and have won the composer many converts among listeners wary of his reputation (undeserved) for ‘difficult' atonality. The recording offered here is a real find. Canadian-born conductor, violinist and singer Gregory Millar (originally Grigorios Manoussos) was a remarkable figure; he substituted for an indisposed Leonard Bernstein, had a career as America's peripatetic conductor of provincial orchestras, many of which he was credited with pulling up to full professional standard, giving'local' premieres of important symphonic works along the way, and founded his Little Symphony during the 1950s during a 9 year stint in San Francisco conducting concerts and opera. The Little Symphony seems to have been a crack pick-up band, sharing players with the San Francisco SO, the Opera orchestra and other West Coast ensembles; its (and his) entire discography seems to be this disc and pioneering recordings of Bartók and Hindemith. These readings of the Greek Dances are more idiomatic, livelier, and capture the spirit of the pieces far better than rival versions, which sound staid and ponderous by comparison (aside from the four that Mitropoulos recorded, which are, predictably, superb). The recording is expertly mastered from the rediscovered stereo tapes, and the sound quality is incomparably superior to the previously issued mono versions; you can still hear these online, but we wouldn’t recommend it - the effect is akin to listening through a cardboard tube under a blanket. By contrast, the stereo tapes sound fresh, detailed, and well balanced. The gift for beautiful treatment of gorgeous melody that shows up again and again in the Greek Dances is also evident in the composer’s songs, including the three receiving their world première recordings here. Two are from 1946; On the Beach is meltingly lovely and tonal; The Music sounds like a tongue-in-cheek tribute to Skalkottas' erstwhile teacher, Weill. 1938's Once Upon a Time shows the influence of the Second Viennese School, which the composer never adopted in a doctrinaire fashion, and the song is lyrical and atmospheric above all. Like the superb 3rd Piano Concerto also offered this month (below), Odysseus is a major work in Skalkottas' output, and a similar example of his genius in writing a large-scale work in an utterly uncompromising atonal, dodecaphonic (-ish) idiom, and through a combination of structural and textural clarity, a fantastically original use of harmony, and sheerly exhilarating compositional and performing virtuosity, making it a compelling and approachable listening experience. A half-hour concert overture in five sections, it was originally for orchestra, but the composer produced this immensely demanding, utterly idiomatic two-piano version late in his life (from the quality of the two-piano writing you would be forgiven for suspecting that the composer was a lifelong member of a virtuoso piano duo). A slow, atmospheric introduction precedes a thrilling, meticulously structured sonata-form movement. An energetic, sinewy fugue follows, a movement of increasing tension and terse argument, and a propulsive, whirlwind finale that ratchets up the momentum before crashing to a close. Historically important, and most enjoyable, are the two Greek Dances played by the fine Greek pianist Tota (Theodota) Economos, who almost certainly knew Skalkottas and received these scores from him. The recently discovered French Radio recording is believed to be the first made of any work by Skalkottas.