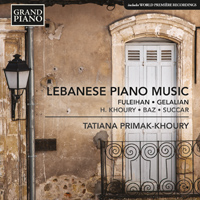 Description: Given Lebanon's position - balanced between East and West, a melting-pot of religions with a turbulent history - and the fact that its composers include expatriots from elsewhere and those who became expatriots in other countries, it is hardly surprising that the music on this CD is as much a mélange of styles as it is. Everything here is perfectly approachable in one way or another. Traditional Lebanese music puts in an appearance here and there - the theme of Succar's very classical, entirely tonal variations, for instance, one of Baz' otherwise French-Impressionist Sketches, some inflections in Khoury's Sonata. Fuleihan's four-movement Sonata is twentieth-century mainstream - the composer spent many years in the USA, and there are traces of Prokofiev and Stravinsky; Khoury's is the most modern piece here, in an acerbic vocabulary, lean and economical, highly expressive and pessimistic in mood, with a 'wind over the graves' finale. Gelalian, likewise, draws inspiration for his highly chromatic, tonal pieces from his native Armenia in rhythm and harmony, and western Europe in pianistic idiom. Tatiana Primak-Khoury (piano).