JULIAN ANDERSON (b.1967): Fantasias, The Crazed Moon, The Discovery of Heaven. 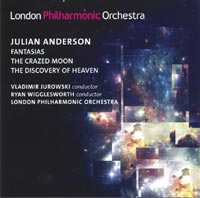 Description: Anderson's idiom is lively and inventive, with an abundance of bold colors and innovative textures, in an harmonic language that embraces diverse modal scales, often giving the impression of bi- or poly-tonality, always with a sense of harmonic direction. Fantasias is a celebration of the symphony orchestra, a concerto for orchestra in all but name, its five movements exploring different timbral groupings (including a very brief excursion into coloristic quarter-tones) in lively, polyrhythmic ebullience. The Crazed Moon (the title from a disturbing image of W.B. Yeats) is a dark-hued, nocturnal in memoriam work for a friend of the composer, full of dissonant complex polyphony and heterophony, with lamenting melodies and tragedy-laden fanfares. The Discovery of Heaven has some instrumental features derived from the composer's interest in Japanese gagaku music, in the glistening chords and efflorescent flute motifs that dominate the first movement. The second movement, 'In the Street' is a cumulatively complex mosaic of diverse, apparently unrelated material - tonal, noisy, vulgar, refined - suggesting the crowding impressions of a busy city. Part three, 'Hymns' suggests a violent confrontation between stately, chorale-like material and noisy activity like a nightmarish reminiscence of the previous cityscape, leading to an exhilarating climax and a glowing, harmonically ambiguous coda. London Philharmonic Orchestra; Vladimir Jurowski, Ryan Wigglesworth (Discovery).