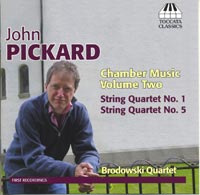 Description: The First quartet is a huge, almost forty-minute single span which nonetheless seems highly concentrated, so much and so varied musical and emotional expression are packed into its ten tautly argued sections. The work has a strong sense of tonal centers, though its constant harmonic restlessness is a result of its basis in an octatonic scale, with all twelve notes controvuting non-serially, which produces a feeling of wide-ranging chromaticism and harmonic density without ever sounding remotely atonal. Much of the piece is intricately contrapuntal - two sections are in fact fugues of contrasting character - to which the composer provides striking contrast in two sections of unison melody. After a somewhat Bart√≥kian nocturnal slow meditation, a scampering perpetuum mobile develops into the work's powerful, dissonant climax, after which the music subsides into an echo of the opening. The Fifth, a recent (2012) work, is cast in a similar extended tonal language, but a more conventional five-movement form. The piece explores aspects of conflict and resolution, with a tensely discursive opening movement, tragic slow movement, nervous scherzo, a movement of great dramatic intensity like an argument between various factions within the ensemble, with little agreement, and a determined, much more tonally directional finale which eventually brings the disputants into accord. Brodowski Quartet