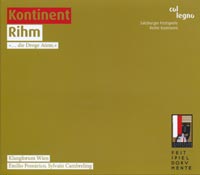 Description: Rihm's pieces here largely predate the (at least partial) embrace of late romanticism that has increasingly featured in the composer's more recent works. The two pieces in memory of Nono consist of music full of brittle sounds and a feeling of pent-up, barely suppressed energy. They share with the subtle, economical Webern the feeling of a dramatic arc assembled from sound events of very short duration and profound implicit meaning. The second of Rihm's Chiffre pieces is associated by the composer with Kafka's 'In the Penal Colony' and seems to focus on the silent, mechanical horror of the torture device in the story. Although highly dissonant, the sudden emergence of chordal textures that sound like disintegrating fragments of a Mahler symphony lend the piece a powerful emotional potency. The most substantial work here is Séraphin-Sphäre, part of a series of works that celebrate extramusical sources of inspiration - graphic arts, theater as well as literature - in this case, Chinese shadow play. Like the slightly earlier pieces in memoriam Nono, the piece constructs an energetic dramatic narrative from isolated events, which suddenly coalesce into motoric, driven motion before abruptly dissipating again. These disparate episodes all feel intimately related, though, as part of a larger whole with shape and direction. Klangforum Wien; Emilio Pomàrico, Sylvain Cambreling (Séraphin).