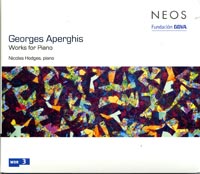 Description: Aperghis is widely known for his theatrical works and the free experimentalism of his scores, so it is no surprise to find elements of both in his return to piano composition in the last decade, after a lengthy hiatus. The title of A Tombeau Ouvert refers to the piece's wild nature; the phrase apparently carries connotations of suicidal frenzy. Having established a kind of motif, the piece takes it on a wild ride, via pounding repeated chords and frenetic, rhythmically complex chains of gestures, before subsiding to a hesitant close. In dense chordal passages the harmony sometimes recalls Messiaen, though for the most part Aperghis's idiom is far less tonally based. Printmusic provides an exception to this, being entirely tonal in an entirely non-functional manner; t he piece consists entirely of a stream of conventional chords, somewhere between Debussy and Messiaen, in abstract patterns. Les secrets, like Tombeau is based on a small amount of material, here extended into 13 brief movements of contrasting character, each obsessively re-examining little motifs before discarding them and moving on to the next facet of the material. Some are very simple, others rhythmically and texturally complex, with a rather impressionistic soundworld, which carries over (with reduced technical demands) to the Pièce pour jeunes pianistes. Simata is the only early work here, from 1969, and was originally for Cagean prepared piano; this performance distorts the piano through the use of the kind of electronics that would have been available at the time of composition, retaining a more homogeneous piano-like sound than the range of percussive timbres of the original version. Nicolas Hodges (piano).