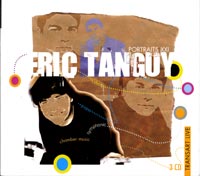 Description: The first disc's orchestral works have a distinctive character, principally centered on the composer's sense of rich, saturated harmony. In this, alongside the full, lush orchestration, one is reminded of Dusapin, and his earlier antecedents, the impressionists. But there is also a sense of structural economy, abundantly in evidence in the tense, rhythmically vital Sinfonietta, an instantly accessible work; here the harmony is clearly founded on modality. Echoes of Dutilleux and Sibelius may readily be found here, especially of the latter in the last movement. Intrada, likewise a substantial three-movement work, teems with color and activity. In general, this restless activity, discernible beneath the surface even of the music's more reposeful moments, is a characteristic of these pieces. The Adagio for Strings is quite tonal, with a turbulent central sec¡tion flanked by music of uneasy repose and ultimately, complete serenity. The busy, exultant Incanto is propulsive and exciting, somewhat reminiscent of Bartók, while the quasi-programmatic tone-poem Eclipse, an evocation of the last such event of the millennium, makes impressive use of a large orchestra in a predominantly tonal depiction of the passage from light to 'catastrophe' and back to light; the sunrise at the end of Gurrelieder is not so very distant, or Francesconi's (superb, but rather more abstract) Cobalt Scarlet that we offered last year. In the chamber works (available separately last year) Tanguy combines a late-romantic emphasis on emotional expression - the lamenting Nocturne, the uneasy Elegie and the soulful Melancolie wear their hearts unashamedly on their sleeves - with a neoclassical elegance of form and avoidance of bombastic excess. In the piano works, the composer's harmonic language is firmly rooted in tonality, largely avoiding extremes of dissonance, and having more in common with Romantic and neoclassical piano writing than the extremes to which the piano has been taken in the 20th century - a healthy dose of good old-fashioned virtuosity adds to this impression. 3 CDs.