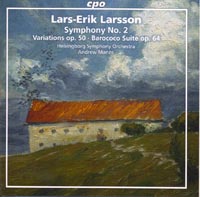 Description: The second volume of this series brings the Second Symphony of 1937 which has the same characteristic of his other two: unlike his suites and other short orchestral pieces (the Sinfonietta being the prime example), the symphonies are weightier and more “serious” in tone. That said, the Second has most in common in tone with Sibelius’ Fifth, especially its relaxed middle movement which (à la Berwald) incorporates a scherzo at its center. The 1962 Variations are an 18-minute work which is supposedly twelve-tone - but what are those melodic lines doing there then? Barococo (1973), a rarely heard piece, is a 17-minute, six-movement work in neo-baroque suite form and close to Prokofiev’s Classical Symphony in its bustling, good-humored neo-classical style. Helsingborg Symphony Orchestra; Andrew Manze.