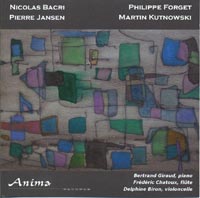 Description: Bacri's flute sonata is an elegantly, classically proportioned work in four movements, with a dynamically rhythmic scherzo and a variation-form finale. The harmonic vocabulary is very tonal, though with a constant sense of Busonian ambiguity - in fact, in many ways the piece sounds like a close relative of Busoni's flute divertimento, and it may not be an accident that the melancholy slow movement bears the Busonian title 'pezzo elegiaco'. Jansen's Vagabondage alternates the alto and standard flutes in a series of episodes of varying character, with impressionistic color and broadly tonal, non-functional harmony predominating. Forget's two little pieces are a gentle flute aria with simple accompaniment, followed by a brief, lively dance. The Kutnowski is expressly intended as a tribute to Piazzolla, and its three movements are based on tango genres, reimagined for the concert hall much as Piazzolla's own works are not infrequently played by concert ensembles similar to this one, preserving the familiar and instantly recognizable harmonic idiom.