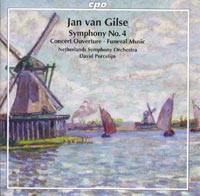 Description: The fourth and final symphony from this Dutch composer dates from 1910-15 and, like his previous works in the genre, has much in it that is redolent of Mahler, particularly in its slow sections and in the magical, moonlit central episode of the slow movement. As in the Third, Richard Strauss is also evident, mostly in the faster, more boisterous music but, having heard four of these symphonies by now, one begins to recognize the style as van Gilse himself. The late Uilenspiegel music, adapted from his opera Thijl in 1941, is much less Straussian given the associations with the title figure, being a very serious, dark and somber funeral march of some eleven minutes; the opera was finished prior to the war but its approach is evident. At the other end of his career stands the 1900 concert overture, a ten-minute piece written at conservatory which doesn't yet share the youthful infatuation with Mahler evident in the Symphony No. 1 completed a year later. Netherlands Symphony Orchestra; David Porcelijn.