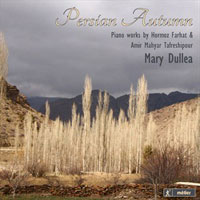 Description: Farhat was, apparently, the first Iránian composer to have received his musical education in the USA. He studied with Milhaud, Roy Harris, and Lukas Foss, the latter praising his First Sonata. This terse and condensed four-movement piece has something in common with Foss' own music, tonal but somewhat brittle, without a note wasted. The Second Sonata is more expansive, and more conventionally tonal, in a mid-20th century idiom (it was composed in 2010 but embraces neither any kind of "new" tonality, simplicity, or other recent trends, nor any progression toward any "advanced" mode of expression). It is in three movements, thoroughly argued but not reaching the heights of virtuosity. Although his PhD dissertation was an extensive study of the Persian modal system, there is surprisingly little of this to be heard in what could easily be sonatas by an American composer, though the little, early toccata, a sprightly specimen of the genre, is based on a Persian folk song. Tafreshipour's pieces are evocations of time and place; the first spare and ascetic, the second a nocturne in name, but evoking crashing waves on the coast of Chabahar in South-East Irán, the third mysterious, with a sense of a dark dreamworld; and Celebration at Pasargadae evokes the grandeur of the Achaemenid empire under Cyrus the Great and a celebration of the Persian new year. Mary Dullea (piano).