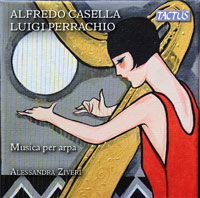 Description: A friend of Casella, Perrachio was so morbidly averse to publicising himself (as a pianist) or his compositions (the vast majority of which are lost), that we know very little about him as a composer beyond this 1936 sonata, a happily rustic piece based on three popular folk songs from different regions of Italy. The three pezzi are in the “old style” of Renaissance songs and dances that so enchanted Respighi and other composers of this generation. Casella’s technically fearsome sonata from 1943, neo-classical with modal elements, has appeared in these pages before. Alessandra Ziveri (harp).