HENNING KRAGGERUD (b.1973): Equinox - 24 Postludes in All Keys for Violin and Chamber Orchestra, C Major - Overture. 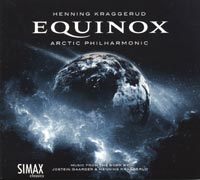 Description: This is an exceedingly fine neo-romantic violin concerto, as accessible as it is original. Not a virtuosic showpiece (though it could only have been written by a true violinist-composer in the tradition of Paganini or Ysaye), so much as an emotionally and philosophically searching work expressed in musical terms of the utmost communicative eloquence. The work takes the unusual form of four 'concerti' each with six movements, moving through all the keys. This sort of thing has been done many times before, but in this case the movements are called 'postludes', and they are musical responses to passages of text by Jostein Gaarder concerning a fantastical voyage through the time zones, starting at the Greenwich meridian, by a narrator facing an existential crisis. Typically of Gaarder (who participated in the premiere by reading from his book), the stories are uncomplicatedly written, yet work on different levels of meaning and contain hidden depths of psychological and philosophical resonance, and Kraggerud matches this beautifully in music that is instantly approachable while teeming with allusions to music of the past, internal cross-referencing of themes - the 'daytime' latitudes have their nocturnal counterparts in related music of different character, for instance; the geographical locations given as movement titles are fifteen degrees apart, providing the twenty-four subdivisions of the compass that correspond to the progression of keys, and coded references to early navigational practices and the musical practices of their times. Henning Kraggerud (violin), Arctic Philharmonic Chamber Orchestra.