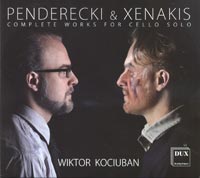 Description: For Penderecki completists, here are two works (totalling 25 minutes) receiving their first recordings: Violoncello totale was commissioned for the 2011 Tchaikovsky Competition in Moscow and combines the composer's late, neo-romantic style with more unconventional means of producing sound from the cello's strings and its body. The Suite is, as Pendercki puts it, a "work in progress", whose seven movements (Sarabande, Serenade, Tempo di Valse, Allegro con bravura, Aria, Scherzo and Notturno) were composed at different times during the last decade (an eighth was premiered two months after this recording was made) and is the quintessence of his modern, all-inclusive style. Wiktor Kociuban (cello).