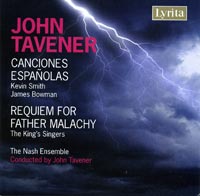 Description: These works from the early 70s pre-date Tavener's increasing adoption of what might be termed 'new spiritual simplicity', and have more in common with 'modern music' of the time than his later output - with significantly greater levels of activity and dissonance. The Canciones are treatments of early Spanish folk songs, accompanied by a varied ensemble including amplified harpsichord and various percussion. While evoking traditional or 'early' music through the straightforward presentation of the melodies, Tavener's settings also surround the melodies with an evocative, colorful aura of modernist texture. The Requiem employs plainchant and a seven-note motif but its mood of solemn liturgy is expressed in a language that owes a great deal to Webern, with ample dissonance, though Tavener's personal styler of later years is prefigured in the arrangement of material in iconic blocks, an emphasis on harmony rather than counterpoint, and repeated gestures. The Nash Ensemble. Original 1976 RCA LP release.