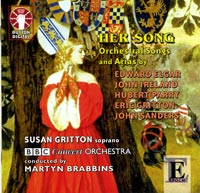 Description: Although not unrecorded, Elgar's orchestral songs are quite rare. They make up 31 minutes of this collection, with the second biggest portion going to Graham Parlett's commission from the John Ireland Trust. He adapts to Ireland's style like he has done to Bax's and the 20 minutes of the composer's songs are gorgeous to hear. A second excerpt from Parry's incompleted opera (the first was on the Dutton Epoch "Sea Fever" release some year or so ago) joins two other first recordings. No texts. Susan Gritton (soprano), BBC Concert Orchestra; Martyn Brabbins.