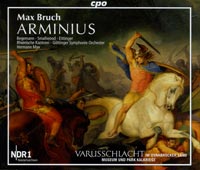 Description: Bruch wrote this oratorio in 1875, at the time when a monument was being finished and unveiled in the Teutoberger Wald to the German tribesmen of whom the titular character of this work was the leader who annihilated three Roman legions in the year 9. The chorus dominates and, not surprisingly, the German tribesmen do too (the Romans get one chorus). There are only two of what you might call "arias" as the narration sweeps in four sections from "Introduction" to "In the Sacred Forest" to "Uprising" to the final, longest and most viscerally exciting "Battle", in the midst of which a truly operatic aria for a dying German prince offers a dramatic pivot. This recording was made at the end of February this year after a live performance at the museum in the park on site, celebrating the 2000th anniversary of the battle. 2 CDs. German-English texts. Hans Christoph Begemann (bass), Michael Smallwood (tenor), Ursula Eittinger (alto), Rheinische Kantorei, Göttingen Symphony Orchestra; Hermann Max.