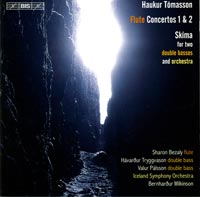 Description: The booklet notes suggest that Tómasson's meticulously structured and detailed works are like a formal garden, organic yet organized, as opposed to an Amazonian wilderness. That's about right, though it falls short of suggesting the Nielsenesque vigour or Sibelian grandeur and wildness that are also features of this music. The oddly scored Skíma - the twin soloists are the only bass register instruments in the orchestra - is most effective in its contrasting moods of brooding landscape and bustling, rhythmic energy. Both flute concerti also exploit the composer's taste for unusual sonorities and colorful instrumental effects, with the flute sometimes approaching a kind of eastern-derived mystical contemplation, with modal inflections, and at others indulging in high-energy scurrying that nonetheless feels controlled with a watchmaker's precision, full of intricate rhythmic games and felicitous touches of orchestration. There is sufficient harmonic and rhythmic stability to Tómasson's style that it remains thoroughly approachable despite its detail and complexity. Sharon Bezaly (flute), Hávardur Tryggcason, Valur Pálsson (double basses), Iceland Symphony Orchestra; Bernhardur Wilkinson.