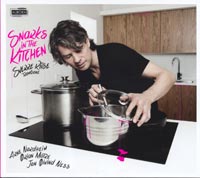 Description: The three Nordheim pieces share material, which also turned up in his ballet music for The Tempest. Like Shakespeare's Caliban, the Snark is a mythical grotesque, from a nonsense poem by Lewis Carroll. The Hunting of the Snark is full of strange, guttural animal noises produced by an array of extended techniques; Tapestry incorporates these into a more complex texture, alongside a lyrical cello and a dense, busy electronic piano part; and The Return extends the original piece with a background of murky, pre-recorded electronic sounds. The trombone part of the Matre consists entirely of voice multiphonics, producing extraordinary colored chords against a tolling chordal accompaniment in the piano. Ness' Moray (as in eel) is typical of the composer's dark, surreal humor, drawing on all manner of sources - the piece abounds in pounding distorted-sounding sounds, which presumably explains the rock music references (think of 'The Artist formerly known as ..., and say 'Sex Pistols' with a kind of lisp, and you get the subtitle). A slow section has cello and piano playing sustained quarter-tones, conspiring to make the piano sound out of tune. Dangerous Kitten alludes to Zappa's Dangerous Kitchen, and the orchestral writing has a good deal in common with Zappa's raucous, complicated polyrhythmic 'classical' style, notably that of Greggery Peccary. Ness manages to introduce a couple of popular songs, cat noises and a telephone, the result sounding very much like something Zappa might have done. Sverre Riise (trombone), Emery Cardas (cello), Sigstein Folgerø (piano), Asbjørn Blokkum Flø (electronics).