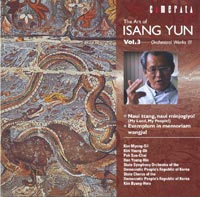 Description: My Land, My People! is an oratorio on a grand scale, which treats the problems of contemporary, divided Korea more directly and literally than the allegorical approach encountered in many of his orchestral works, employing metaphors drawn from traditional folk tales. As one might anticipate of a work destined for first performance in North Korea (which immediately preceded this recording), the work is in a significantly more popularly accessible style than many of Yun's compositions, its harmonic language mostly boldly tonal, with very limited use of the dissonant cluster textures, let alone avant garde techniques, encountered especially in Yun's earlier and more western-influenced music. Elements of East Asian æsthetics and inflections, especially in the vocal writing, are notably present as a part of the composer's convincingly integrated vocabulary. The piece certainly radiates a sense of national pride and its impressively grand expression. Exemplum commemorates a militarily violent event , and is appropriately vehement, aggressive and militaristic in tone, apparently inviting the listener vicariously to witness and be outraged by the event depicted. Since this is a work of condemnation rather than celebration, Yun adopts a more dissonant idiom than in the oratorio, but the work remains direct in expression and far from unapproachable. Kim Myung-Sil (soprano), Kim Young-Ok (alto), Pak Sun-Chai (tenor), Han Young-Hin (bass), State Chorus and Symphony Orchestra of the Democratic Peple's Republic of Korea; Kim Byung-Hwa.