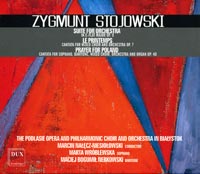 Description: In a month when labels and distributors put out reissues or nothing at all, this Polish selection is the best orchestral disc to be available. You'll know Stojowski from his appearance in Hyperion's "Romantic Piano Concerto" series (they did a solo disc as well). His suite dates from 1891 and is in three movements: a theme-and-variations based on a Polish adaptation of the Latin Salve Regina hymn whose melancholy melody receives many ingenious treatments, a second movement Polonaise in mazurka tempo, and a final Rêverie et Cracovienne. Very attractive and no mistaking the nostalgia of an expatriate Pole for his homeland. Le printemps (1895) sets a French adapatation of a Horatian Ode and is an entertaining little seven-minute work which the notes liken to a "Polish Gilbert and Sullivan". The 22-minute Prayer is at the other end of the emotional spectrum, dating from 1915, triggered by the First World War, based on a hymn to the Virgin Mary by a 19th century Polish poet and is a very dramatic piece whose language ranges from lyrical Romanticism to a highly chromatic Impressionism. No texts. Marta Wróblewska (soprano), Maciej Bogumil Nekowski (baritone), Rafal Sulima (organ), Podlasie Opera and Philharmonic Choir and Orchestra in Bialystok; Marcin Nalecz-Niesiolowski.