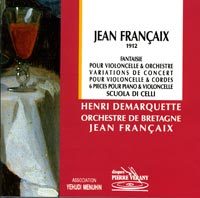 Description: This 70-minute disc is a live recording of a concert to celebrate the composer's 80th birthday and represents, with the exception of the Aubade, his entire œuvre for cello. The Scuola di celli was adapted at cellist Maurice Gendron's request from his 1933 ballet Scuola di Ballo (on themes of Boccherini) and the six cello/piano pieces is a Gendron dedication, consisting of three original pieces, two adaptations from earlier orchestral works and, rounding it off, a sparkling adaptation of Chabrier's Habanera. The Fantasie is a neo-classical suite of five movements from 1934 and the variations date from 1950 - ten of them with three lovely, slow and lyrical ones providing islands of calm amidst the wit and virtuosity of the rest. Henri Demarquette (cello), Orchestre de Bretagne; Jean Françaix (piano). Original 1994 release.