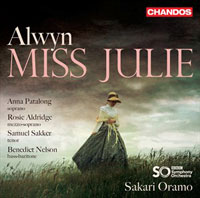 Description: ‘Why has this intense, brilliantly orchestrated, claustrophobically gripping masterpiece been so neglected since its 1977 premiere?’ asked Richard Morrison in The Times of the concert performance in the Barbican that preceded this recording. Miss Julie is Alwyn’s last large-scale work, written in 1973-76 to Alwyn’s own libretto (a previous 1979 recording was issued by Lyrita in 1992). The naturalistic drama and lifelike characters of that play appealed to Alwyn from an early age – in fact, he previously attempted to compose an opera on Miss Julie in the 1950s. That attempt failed, because of differences with his then librettist, Christopher Hassall. Alwyn believed that in opera, the action should be self-explanatory, arias should serve a dramatic purpose (as opposed to sheer vocal display), characters should sing to each other and not to the audience, ensembles should be minimized and the text should be set to vocal lines that reflect natural speech patterns. 2 CDs. Libretto included. Anna Patalong (soprano), Rosie Aldridge (mezzo), Samuel Sakker (tenor), Benedict Nelson (bass-baritone), BBC Symphony Orchestra; Sakari Oramo.