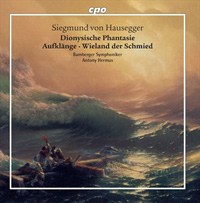 Description: cpo’s first Hausegger release nine years ago (05J001) was the massive and impressive Natursymphonie. These pieces are hardly small-scale but are still a bit in the shade of that leviathan: a 31-minute set of variations on a children’s song which you’re not likely to recognize, allowing you to just float along on waves of mostly moderate tempo orchestral colors - this from 1917 and inspired by the arrival of his second child; a 19-minute symphonic poem full of manly thrusting, striving, contending and struggling (as a young man will do - it’s from 1896 and was his first orchestral work); and the 17-minute symphonic poem from 1903 which also has a lot of striving and struggle but, in addition, a love interest represented by a soulful and feminine secondary motif. Because this is all so enjoyable it’s good to report that the notes tell us of another upcoming release on this label with the tone poem Barbarossa and the 3 Hymnen an die Nacht for baritone and orchestra. When? Who knows? Bamberg Symphony; Antony Hermus.