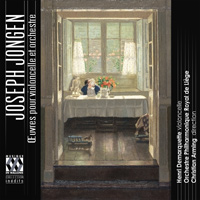 Description: The big (34 minutes) concerto was written in 1900 when the young Jongen's mind was still pointing toward Germany with Brahms and Bruch the main influences with just a touch of Wagner and, in the rondo finale, perhaps even of Tchaikovsky in heroic mode. The first Poème, from the preceding year, is of the same cloth but the second, written in 1917 while in British exile, a longer (13:37) work of melancholic lament with a brighter, march-like center which looks forward to the end of the war before lapsing back into darker emotions. Henri Demarquette (cello), Orchestre Philharmonique Royal de Liège; Christian Arming.