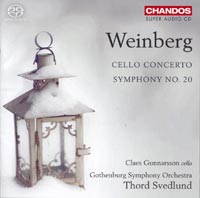 Description: World Premiere Recording of the 1988 symphony, a 40-minute work in five movements: two long slow movements bracket two scherzos which sandwich an intermezzo-like central movement. Notewriter David Fanning calls it "a challenging work the character of which is exceptionally hard to fathom". One scherzo is folksy-quasi Mahlerian, the other a driving and powerful piece quoting material from Weinberg's opera The Portrait. The intermezzo is kind of Hindemithian, over an atonal bass line. The first slow movement is drained of emotion, bleak and gray and its finale counterpart is rather more full of pain and lament but what it might mean is uncertain since The Portrait's final scenes are of similar emotional content. Up to you... The concerto dates from 1945-8 and is chock full of Jewish themes, just the sort of thing which the Zhdanov persecutions of the latter year forced into years of silence. Claes Gunnarsson (cello), Gothenburg Symphony Orchestra; Thord Svedlund.