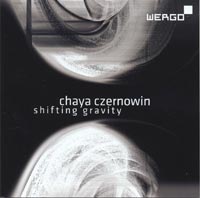 Description: Shifting Gravity consists of three pieces for string quartet, one of which is formed by playing the other two simultaneously, separated by two works for highly unorthodox instrumental ensembles. Scientific metaphors abound in the composer's description of her works; the two outer quartet pieces are 'seeds' - but they could also be molecules, as they combine to form a 'crystal'. And by their nature, too, the sound elements that make up these 'seeds' - tiny gestures, often noise-textured rather than conventionally played notes - resemble the building blocks of matter, bound together according to natural laws dependent on the relative energy levels of their component atoms. Energy is a constant feature of Czernowin's music; the sound objects are in constant, restless motion. The ensemble movements are full of instrumental color, with microtones and extended playing techniques central to their vocabulary. Winter Songs III extends the sonic palette further still, adding electronics to a larger, diverse ensemble in a predominantly dark-hued work of strange textures and sound effects. Quatuor Diotima.