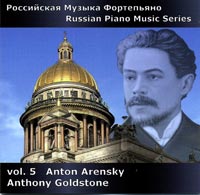 Description: lthough he wrote large-scale orchestral works too, Arensky also excelled at the piano miniature, as this collection of 38 items will prove. Although some contemporaries called him the "Russian Chopin", he was influenced by so many other 19th century Romantic composers that his own style is hard to characterize. This recording was one of the last to ever come out on the late Olympia label and was not widely distribtuted. (It also duplicates nothing on the Hyperion Stephen Coombs Arensky recital, if you were wondering.) Anthony Goldstone (piano). Original 2001 Olympia release.