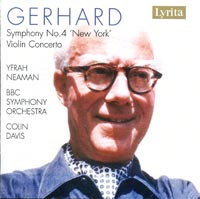 Description: The concerto dates from 1942-45 and is probably Gerhard's most approachable works of his mature periods. It is also probably autobiographical in its central movement\'s dark introversion - Gerhard brooding on his exile from Spain. The first movement uses Catalan and Spanish folk motifs and the finale quotes the Marsellaise in addition to the Sardana, Catalonia\'s national dance, in an obvious tribute to the Allies\' victory and a rude gesture to Franco. Commissioned for the New York Philharmonic's 125th anniversary, the single-movement symphony (1967) is in the composer's tough, dissonant style. More a concerto for orchestra than a symphony, its introduction here and there of Spanish- and Catalan-sounding motifs softens the impression of academic rigor while the spectacular recording offers its own reason for owning the only currently available version of this work. Yfrah Neaman (violin), BBC Symphony Orchestra; Colin Davis. Original 1972 Argo LP release.