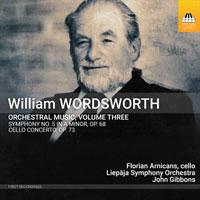 Description: Wordsworth's overdue rediscovery (06T008, 04R007, 08V009) continues with this third volume in Toccata's laudable series. As we’ve come to expect, the works here are serious in tone, tonal in idiom and worked through with the thoroughness and taut argument that his studies with Tovey would suggest. The half-hour Cello Concerto is a typically tough, rugged work, which even in its tender, lyrical moments avoids sentimentality. The long first movement, half the length of the whole concerto, is based on three ideas given out in the first several minutes and tersely disputed between soloist and orchestra, before a contrasting lyrical idea is introduced. The themes are developed and this section reaches a climax, after which, at the central point of the movement the cello reflects on the material in an extended cadenza. The orchestra re-enters in more meditative mood,but again the discussion leads to a powerful climax before the movement ends with a feeling of resolution. The slow movement is an extended span of long-breathed melody, briefly interrupted by a stormy squall, soon banished. The rondo-finale is largely untroubled in mood, with a feeling of easy-going gaiety, though even here, Wordsworth can’t resist introducing a rather less relaxed fugue, which culminates in a powerful climax. A cello cadenza examines the movement's material, introduces the return of the lively first theme, and the movement genially makes its way home. The symphony, from 1957 to 1960, shows the composer at the height of his inventive powers, and was hailed as a major work at the time of its appearance; it is certainly one of the composer’s finest, and most original and eloquent. The opening movement is noble, rather Sibelian, with a sense of wide-open, lonely vistas. It introduces and progressively transforms a stirring ascending theme which recurs as a motto throughout the work. The central scherzo is energetic and glittering, full of felicitous touches of inventive orchestration and unexpected textures, and puts firmly to rest any suspicion that Wordsworth was in any sense a staid or reactionary symphonist, or in any sense "conventional". The finale begins with a sombre introduction based on the motto theme, which transitions abruptly into a determined allegro varying the motto theme with accumulating momentum and tension (inevitably including a terse, rigorously worked fugal episode), and punctuated by imposing fanfares, leading to an impressive valedictory conclusion. Florian Amicans (cello), Liepāja Symphony Orchestra; John Gibbons.