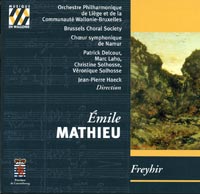 Description: A Norse god? A legendary Wagnerian choral/orchestral piece? No - Freyhir is the name of part of the forest in the Ardennes where Mathieu grew up and this 60-minute work is part impassioned ecological plea (really - 125 years ago!) and part cheesy made-up mythology mixing the Norse goddess Freyja with resistance to Caesar's legions. Dating from 1883, the work has its Wagnerian overtones but also owes much to currents of contemporary French music. A plea to stop the deforestation of the composer's beloved forests with a central war-like interlude (seemingly created because of the need for a martial crescendo in Part Two of the work), a virile yet pastoral mood - heady pantheism - reigns in the outer two sections and the whole thing goes by so fast that you end up quite impressed by its originality and Mathieu's ability to create something personal from such varied influences. (It's part of a trilogy too, but we'll probably never hear the other two...) French-English texts. Véronique Solhosse (soprano), Christine Solhosse (mezzo), Marc Laho (tenor), Patrick Delcour (baritone), Brussels Choral Society, Namur Symphonic Choir, Liège Philharmonic Orchestra; Jean-Pierre Haeck.