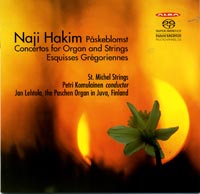 Description: This French organist/composer of Lebanese birth followed the path of Ravel and Messiaen, his Catholic beliefs resulting in much use of Gregorian melodies - as in his Esquisses, which could also be a short organ mass, and in the slow movements of the organ concertos. The Third also employs a Maronite hymn in its finale and overall, through its luxuriant triads, virtuosic runs and glissandos and rhythmic vivacity, is the spiritual opposite of the much sparer First. The 19-minute Flower is a set of variations on a hymn tune composed by Nielsen and rings the changes with the high spirits of both his French models and the Britten of the Simple Symphony. Jan Lehtola (Paschen organ, Juva, Finland), St. Michel Strings; Petri Komulainen. SACD hybrid